Not much will change 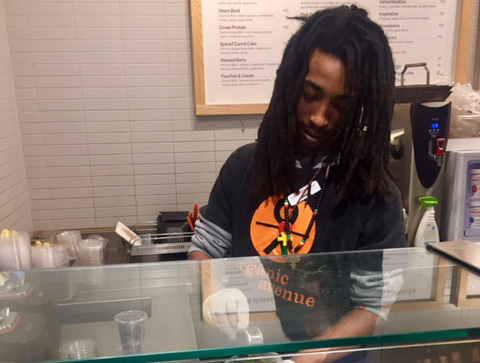 Jamel White has a baby on the way and another one at home, and he makes $12.50 an hour. He lives at home with his parents and works at Organic Avenue, a boutique Manhattan health food store that serves pre-made organic meals and has a plant based vegan market. White, who attends Apex Technical School to become an electrical engineer, is working to pay his college tuition. He’s not used to making such little money and feels it’s never enough. He supports raising the minimum wage but thinks it won’t have much an impact on people’s lives unless prices stop going up too. “The way I look at it, is, back in the day people used to make four dollars an hour. I say that, as it [the minimum wage] goes up, the prices go up, so nothing’s really changing,” he said. “It’s just for the hype, like – oh we’re making $15 dollars an hour. It’s not really changing anything.” – Alix Langone